The Nicholson Bench With Holdfast Vice


I needed a few things from this bench. As I alluded to it needed to be light or a least a lot lighter than my current benches. Second it needed to be something I could take apart. In other words, knockdown designed. Third I really didn't want to drop anymore money on vice hardware considering this would be used only on occasion. 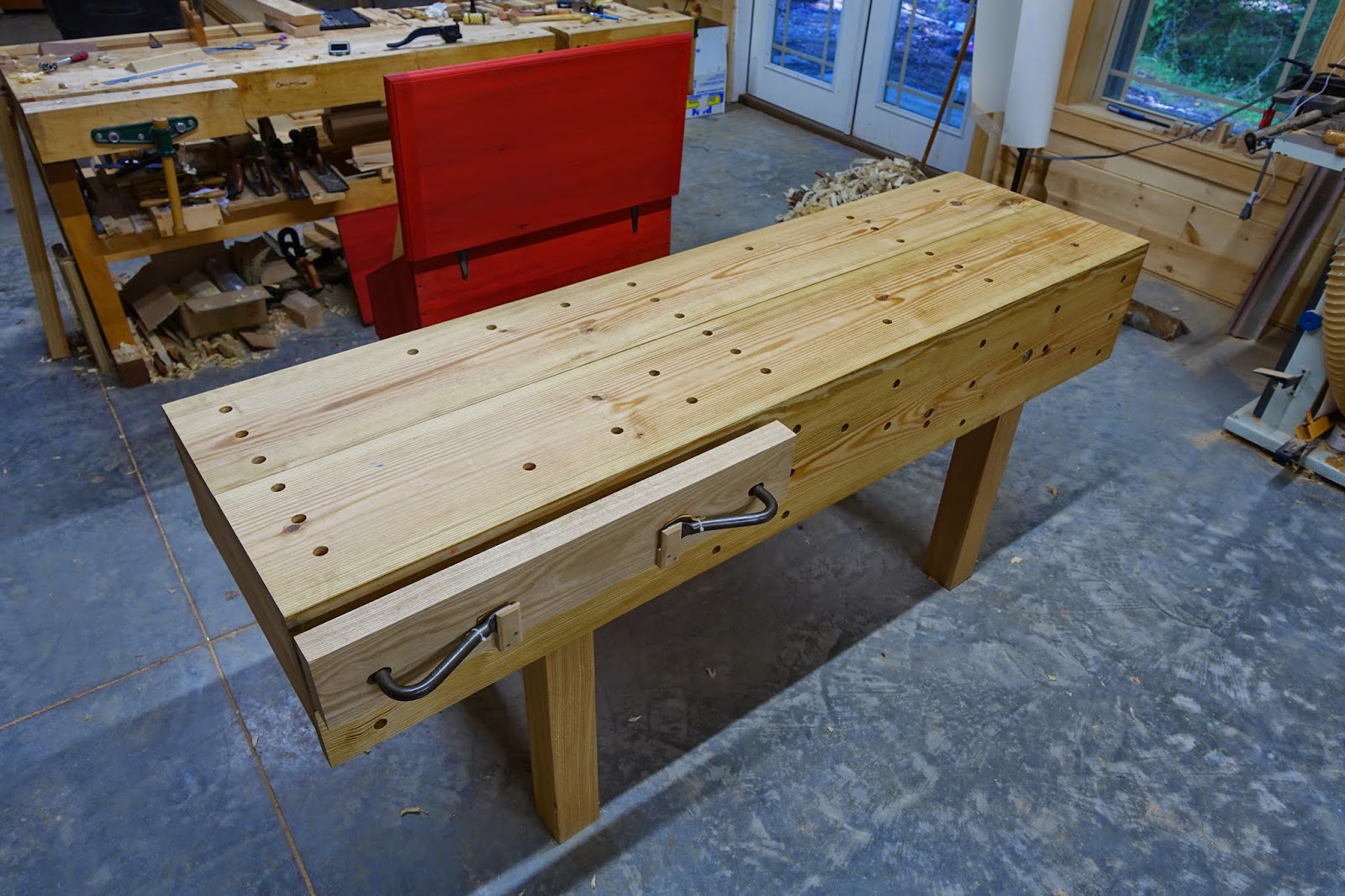 About that time I had seen Mike Siemsen make a no non-sense Nicholson bench from home center materials. It really caught my eye as a simple solution. Now all I needed to do was make the legs removable. I decided to use some barrel nuts or bed bolts. These are cross-locking nut thingamajigs.

Here are some pictures to see the way it assembles/disassembles for transport.


The legs are dadoed into the front and back boards to stop lateral shifting in heavy use.

Once I had that down I needed to address my last concern. The methods of securing materials to work them. Obviously the faces, edges and ends of boards.

For working the faces a simple holdfast and batten method seemed to be the best option rather than a costly and time consuming instillation of and end vice. This is something Richard over at The English Woodworker resurrected and works incredibly well. I use the sliding lock from my Dutch tool chest as the batten since it travels with me and the bench.

For working the edges of a board I use bench dogs or holdfasts in the holes on the face of the bench to support the board while holding it securely with at least one hold fast. Just that simple.

Since I was on the hold fast kick, up to this, at some point a new fangled face vice contraption just popped into my head. What was the inspiration? Who knows. I have never seen anything like it thought it is so simple I genuinely doubt it could be entirely unique. But I guess it could be. If so I am dubbing it the Jamesfast Vice. Boy thats a little egotistical, don't you think. :) Feel free to call it the Holdfast Vise. That makes more sense anyways.


This is a simple device really. It is just a pair of holdfasts and a board for a vice jaw. Hit them both down to secure. Hit the backs of the fasts to loosen. The key to making it work is to insure that the front jaw has a slot rather than a straight hole for the holdfast to pass through. This allows the holdfast to properly "grab" in the rear jaw while not binding in the front jaw.

I added a couple of "L" shaped blocks of wood to hold up the ends of the holdfasts while they are not knocked securely in place. 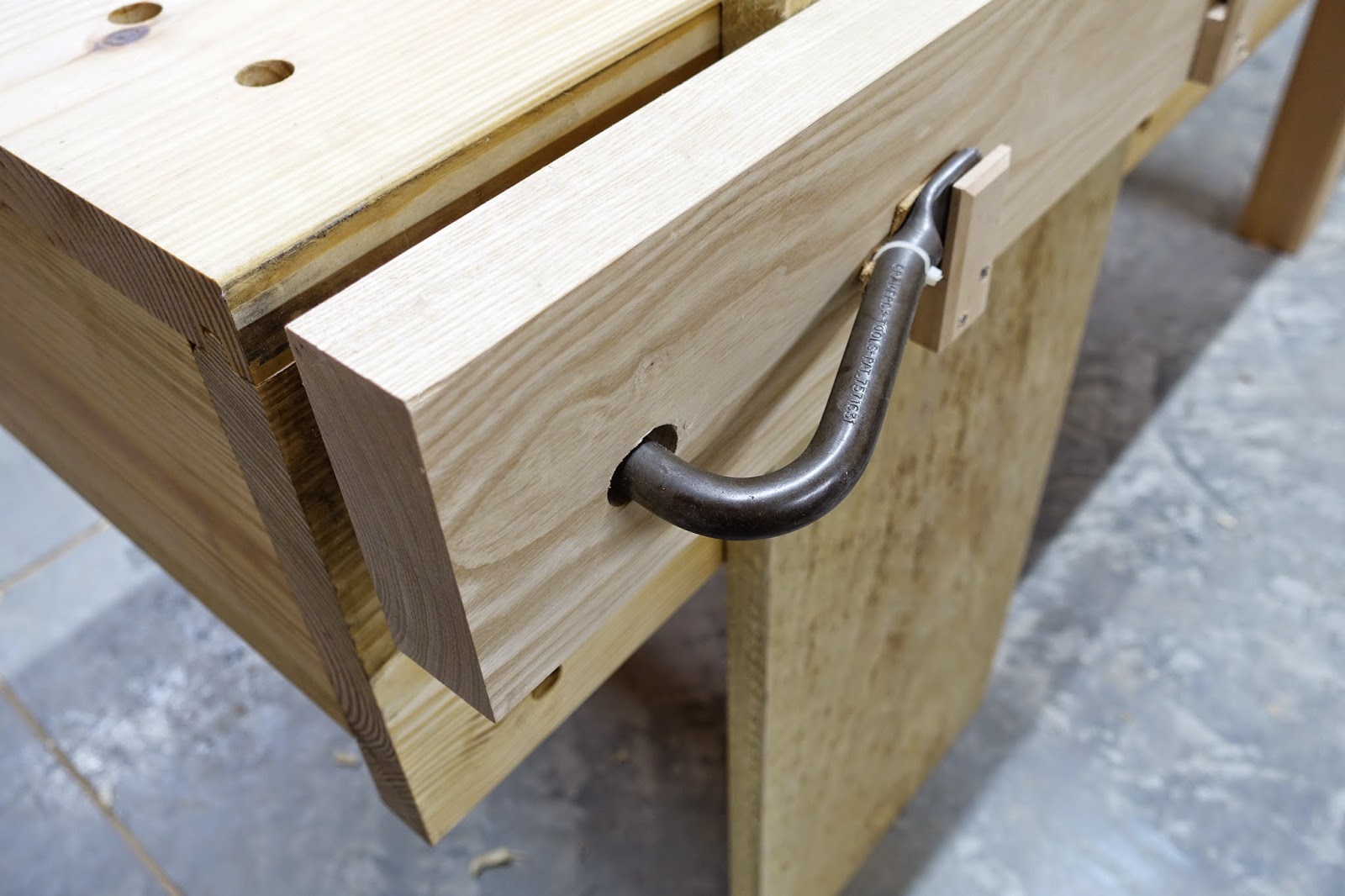 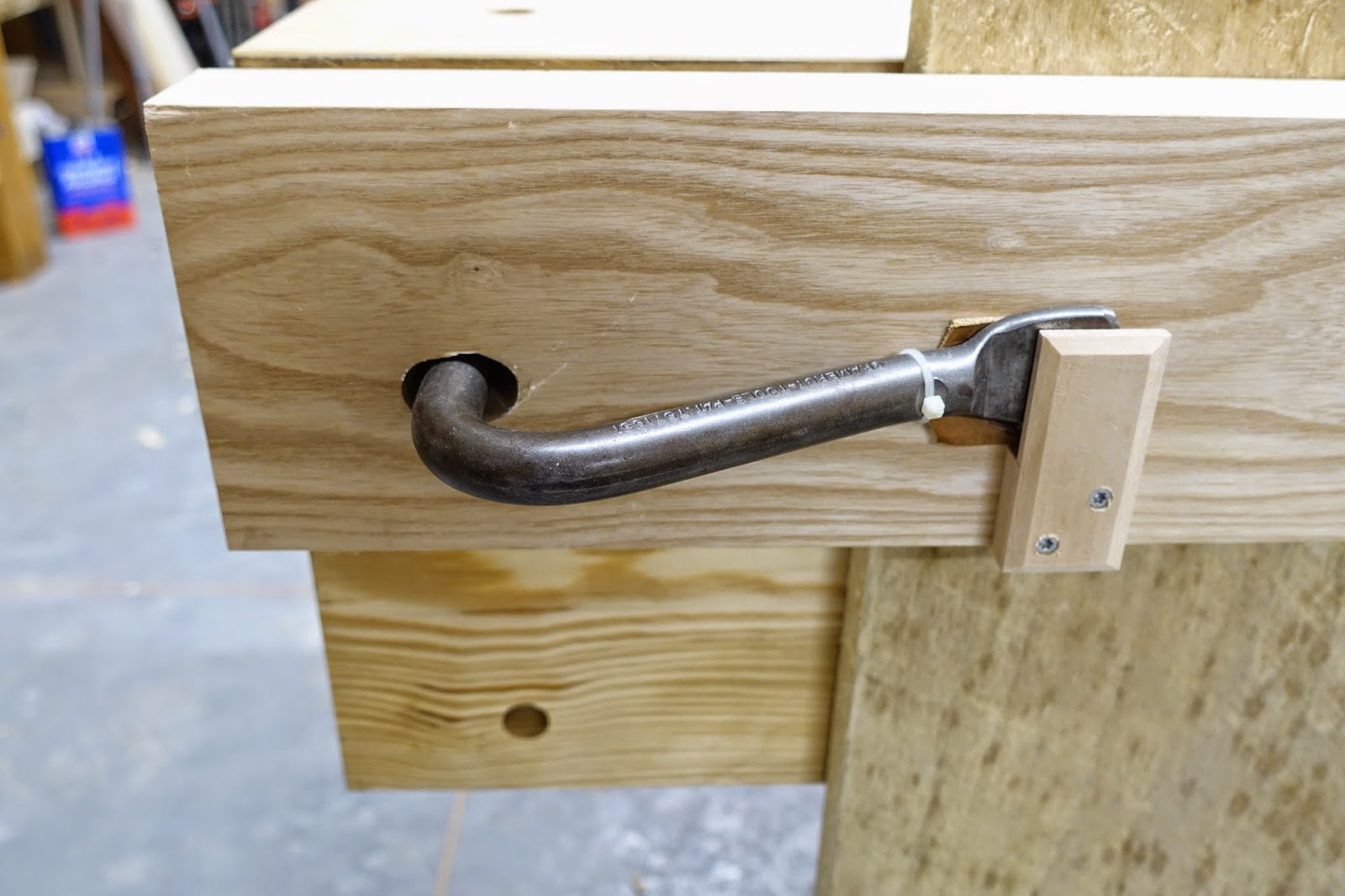 I will admit this is not a perfect vice. What is, right? Anyway, it works best if the end of the fast lands over some part of the piece that you are holding. If you do, it works just like you would expect. If not then it might not want to really grab, duh!

Heres is one other detail that might help you see how the parts interlock. The top and sides are tongue and grooved. The top is floating and the sides are glued. These are the only "fancy" joints on the bench and I debated doing them. I think the top benefited the most from this.  This is how I did it but I am sure it could be altered without ill effect. 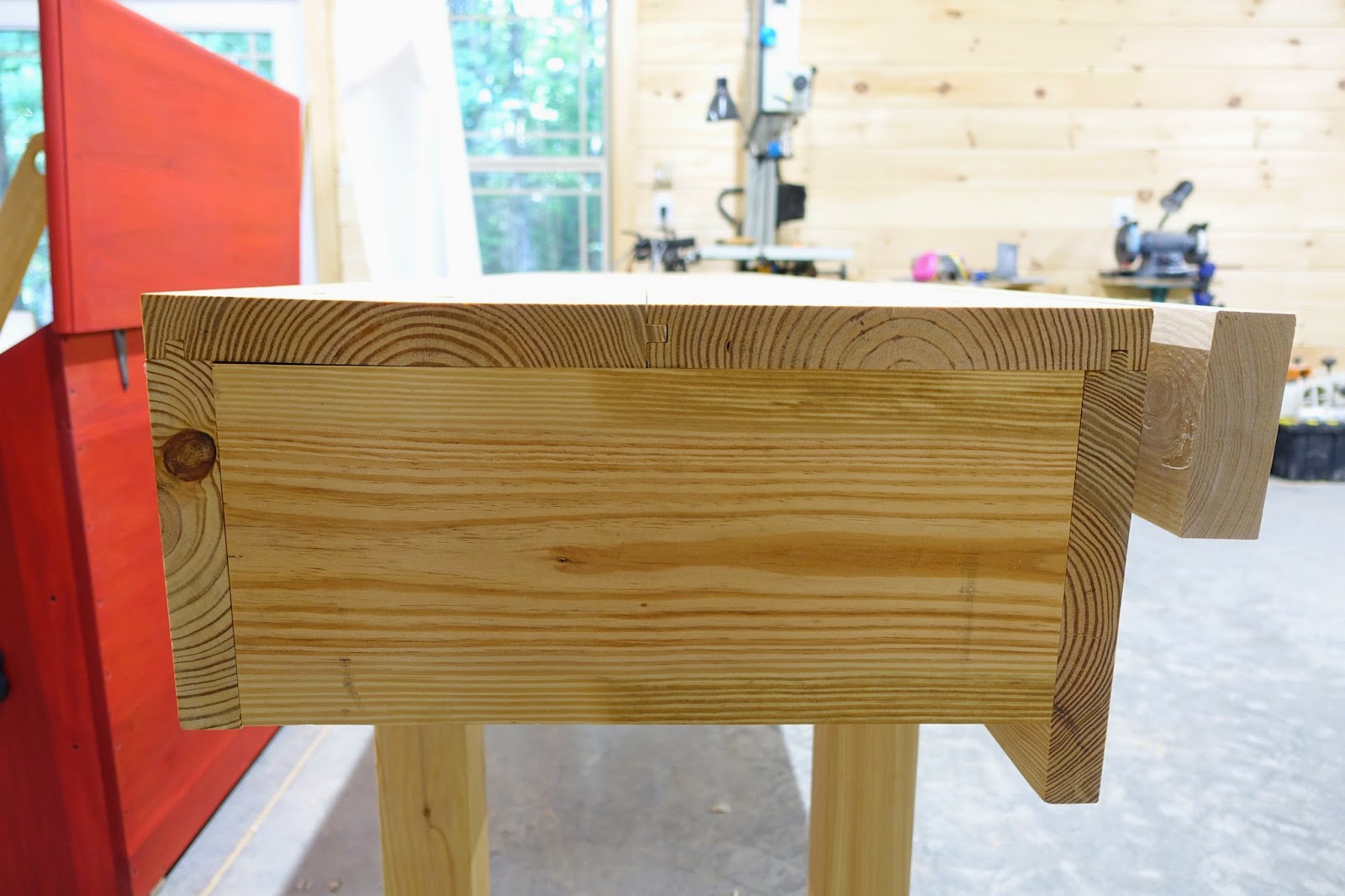 All the cross ribbing was installed with pocket holes and screws but could have been face drilled straight through if one didn't have that gizmo.

Once I was done with the bench I got really excited about what I had just accomplished. I had made a bench for around a hundred bucks (not including holdfasts) that actually worked and worked really well. When I consider how many new woodworkers could have an authentic way to have a serious hand tool woodworking bench without a major chunk of money, that no doubt they have other real world things to spend on, it is pretty cool in my book.

At the event that I first brought this to I was surprising how many people asked me about the bench (rather than my tools). Did I have plans, etc?

Chris Schwarz was at this event as well and we had a short chat about it. After that I went home and stored it away. I am happy that Chris ran with the knockdown aspect of the bench and applied the deep wealth of knowledge on workbenches and really rocked a new design. Read about it here if you haven't seen it already. Or watch this video he posted on it.

My bench looks pretty lame compared to what he put together. But lame or not it works! So good news is that you can make one too. No, I don't have plans. I would love to but at this moment in time I am jam packed with tasks. Please look at the photos and go buy some lumber. It really is as simple as it looks.