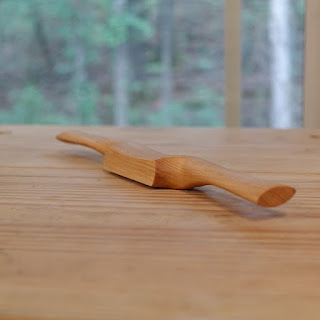 As many of you already know, I began my woodworking career as a furniture maker and quickly went to making chairs almost exclusively. As you can imagine, that let to a lot of time using a spoke shave. I have formed a few opinions on what makes a great shave and have been interested in exploring what makes a really great traditional spoke shave.

Back in May of this year, while hosting a windsor chairmaking class by Peter Galbert, I got poking around his shave collection and quickly settled on one that I have had a deep interest in making for quite some time. It was a traditional shave in boxwood with a blade that is fitted with bent tapered tangs. You probably know the style. They were made by the thousands in the 19th century but any you find today are usually quite worn out from use.

I wanted to take a moment and describe the difference between these spoke shaves and modern ones. I think great examples of a modern spoke shave are the Brain Boggs designed ones that Lie-Nielsen sell. They are so well known that I need not say much. They function much like a plane and are intuitive in how they are used and set up to anyone that has used a hand plane. They're great on long grain wood fibers and for making final finish cuts.

Now there are the traditional spoke shaves that are not intuitive to use for the novice. Explaining their function is not simple to do in words. I have a video demonstration below.  Essentially the blade has one setting. However, the depth of cut is determined by where you apply pressure on the toe of the sole in front of the blade. The toe is slightly rounded so if you rock further forward you will be taking a lighter cut while if you rock further back toward the blade you will take a deeper cut. Much like a travisher. This functionality makes these shaves incredibly versatile. You can go from a cut that is hogging off material straight into a finish cut, all done by feel. These may feel a bit awkward to use initially because of this versatility but you will quickly realize how great these shaves are. They really excel on end grain shaping such as on the front of a windsor chair seat.

One of the drawbacks I wanted to address in this design was how quickly all wood spoke shaves tend to wear unevenly on the sole. Some try to address this with a brass sole but I wanted to keep that all wood feel and avoid adding the clunky appearance and feel that brass on wood seems to do. I added an end grain boxing insert to the sole like you would see on a wooden plane. This takes more work than slapping a piece of brass on but I am really happy with the results. This is a prototype shave, by the way, so I promise the production ones will have a centered blade and boxing. :)

After several months of exploration I developed what I think captures the feel and function of a traditional shave while also capturing the look of one, as well. Here is a short video describing the function of my traditional style spoke shave versus a modern one.

Stay tuned for more on the production of this spoke shave. In the meantime you can email me at calebjames(at)me(dot)com if you would like to get on the wait list. I am aiming for December 2015 to start on these and possibly completion in January. The price will be $185 + shipping.